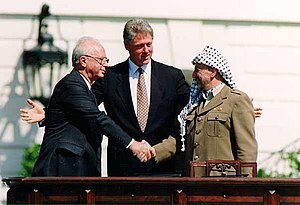 By Ray Hanania
Saudi Gazette, Sunday Jan. 27, 2013
Over the past year, it has been very difficult to support peace as Israel’s hardline government and extremists there have worked to destroy peace and encourage hatred. Israeli Prime Minister Benjamin Netanyahu has ruled over a government that has embraced conflict, turmoil and hate.

Palestinians, discouraged by years of Israel’s failure to live up to its promises, made one last effort to push for peace, offering to return to the negotiations if Israel would do only one thing: Freeze its land grab and stop building illegal, racist Jewish-only settlements.

But Netanyahu, backed by one of the most racist political parties in the Middle East, Yisrael Beiteinu Party, and supported by the racist settler movement which has grabbed tens of thousands of acres of privately owned Palestinian civilian land, said no.

Netanyahu is incapable of compromising his extremist ideology of racial discrimination and Jewish superiority. Worse, the majority of Israelis have been supporting his extremism and incidents of violence against Arab Christians and Muslims, rarely reported in the Israeli news media, increased not just in the Occupied West Bank and Occupied Jerusalem, but in Israel itself.

It was really the apathy of Israelis that empowered Netanyahu’s anti-peace hatred and the failure of any one Israeli to step into the courageous shoes of the late Israeli Prime Minister Yitzhak Rabin, who was murdered by an Israeli settler fanatic and supporter of Netanyahu in 1995. In the last 17 years since Rabin’s death, peace has been butchered by Israeli fanatics who have used the lulls, and the delays and the violence from both sides to block peace and fan the flames of hatred.

This week, Israelis returned to the election booth and the pundits, across the board, all predicted that Netanyahu would win big, and would create a mandate to strengthen his hardline rejection of morality and the rule of law.

But that did not happen. Netanyahu’s coalition of hatred lost much of its support, winning far fewer seats than he has won in the past. Netanyahu’s party won 60 seats. But a newcomer who may be the Messiah that the peace movement has been seeking wandering the deserts of despair, Yair Lapid, managed to cobble together what can become a powerful movement for peace, winning 48 seats that coupled with the often obstreperous Arab parties, which won 12 seats, could claim 60 seats as well. Lapid’s party is appropriately named in Hebrew Yesh Atid, or “There is a Future.”

The burden now falls on the shoulders of the Palestinians who have mastered the art of complaining and blaming but continue to fail in their own leadership decisions, always seeking to choose the nonexistent option of “everything” over the realistic and only remaining option “something.” When the Arabs demand “everything,” they always get “nothing.”

But Lapid, a former actor, journalist, author, and TV news anchor, refused to give up and, just this past year, launched his party of hope. Over the past 17 years, hope has been weak. And under former Prime Minister Ariel Sharon, Netanyahu and even with the rise of Hamas in the Gaza Strip, hope has be the victim of open hostility.

So many extremists rose to fight the peace process and for every extremist activist, 100 peace activists turned away. It almost seemed as if peace had died last year as Netanyahu announced the continued expansion of more and more settlements, pushing even the hapless Palestinian National Authority and weakened President Mahmoud Abbas to shrug that maybe the only option remaining was to disband the PNA. It was a view shared by other Palestinians, as well, including myself. No matter how much we tried to stand tall as events collapsed around us, it became even more difficult.

Yet Yair Lapid has proven that hope is more powerful than despair.

Palestinians will easily find aspects of even hope that they will reject. They control 12 seats in Israel, which the new Centrist coalition needs if it expects to revive the peace process. The Palestinians who support reviving peace will face many hardships again. Hamas, which has grown in strength during the 17 years of despair, will return to its fundamental essence of extremist rejection. Fanaticism, which has spread throughout the Middle East, will pause from undermining the Arab Spring in Syria, Egypt and other Arab countries, and it will turn its ugly head to focus on Palestinians and Israelis.

If Yair Lapid manages to force Israel to finally live up to its obligations, freeze settlements and recommit to a peace based on two states including a sovereign Palestine State alongside a sovereign Israel State, then Palestinians have a moral and religious obligation to do everything they can to make that slender hope happen. Otherwise, the failure of peace will fall on our shoulders and we should be ready to live our lives as ghosts in another land.

(Ray Hanania is an award winning columnist. Reach him at www.TheMediaOasis.com.)